At Spawn, you'll see two Crates, an "Alpha" and "Omega" crate. You can open these Crates with keys to win special prizes! You can purchase the keys at store.pandacraft.org. Purchasing ranks also comes with keys. The Sponsor rank has a weekly kit that gives you an Alpha and Omega Key. Lastly, you can earn keys by achieving voting milestones or hitting voting jackpots in-game (/vote).

Once you have a key, right-click the appropriate Crate to open it. The animation will stop on a random item and you will win that item!

Items are available in multiple rarities, which you can see by left-clicking a Crate. This will open a menu displaying all the prizes that Crate has to offer. If you hover over one of the prizes, it will tell you the chance you have of winning it.

NEW! Crate Armor Sets​
While wearing one of these complete sets, you'll get some awesome particle effects and the ability to use "/fly"!
Both sets are made of colored Leather armor but they're as tough as Diamond armor and will never break.
All of the set pieces are also Soulbound, meaning you'll keep them even if you die. 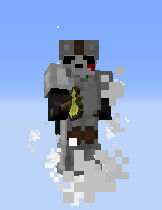 All of the individual armor pieces will function on their own, but you'll only get "/fly" and the awesome particles while wearing the full set.

So how do you get these sets?
You can create them by converting the armor from the Crates! =D